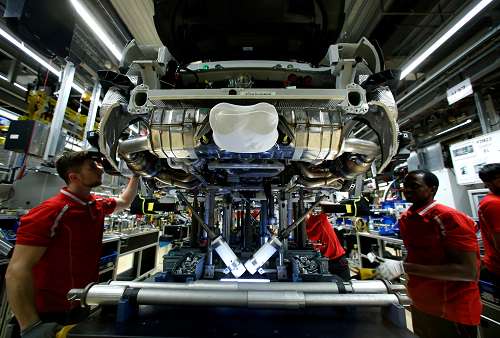 BERLIN - The German economy will slide into a recession in the current quarter, the Kiel Institute for the World Economy (IfW) said on Wednesday as it slashed its growth forecasts for Europe's biggest economy due to trade disputes and Brexit uncertainty.

The IfW institute said it expected the German economy to shrink by 0.3% quarter-on-quarter in the third quarter after a 0.1% contraction in the previous quarter.

"The real problem with (U.S. President) Donald Trump's trade disputes is not the tariffs themselves, but the great uncertainty about what is to come.

Kajol reveals what she likes the most about Ajay Devgn

Fact-check: Has the RBI really asked banks to accept NPR letter as a KYC document?

Hafeez and Malik's experience will help me and team: Pakistan T20I captain Babar

Listen! A Senior Shiv Sainik calls up MNS leader to congratulate for their 'new stance'

GoAir Temporarily Suspends Some Flights Due to Delay in Aircraft, Engines Delivery

'Thank You Modi Ji for Emboldening Us,' Say Women of Shaheen Bagh

Data privacy must be seen as a human right, says Microsoft's Nadella

PM Modi to interact with winners of Rashtriya Bal Puraskar 2020

WATCH: Faiz's 'Hum Dekhenge' fused with Tagore's 'Where the Mind is Without Fear'
sitemap Disclaimer
Newsdig.in 2019