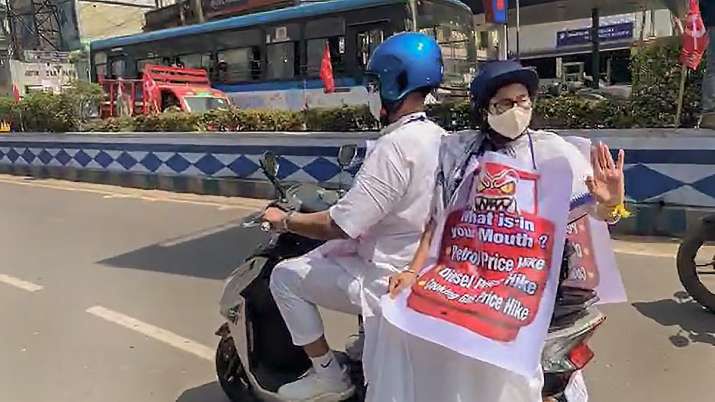 West Bengal Chief Minister Mamata Banerjee rides pillion on an electric scooter to reach Nabanna (State Secretariat) during a protest against the hike in fuel price, in Kolkata.

West Bengal Chief Minister Mamata Banerjee nearly fell off while driving an electric scooter in Howrah on Thursday. The Chief Minister was driving an e-scooter as a mark of protest against fuel price hike. She quickly regained her balance with support and continued to drive. She was travelling to Kalighat from State Secretariat in Nabanna.

Staging an unprecedented protest against the price hike of petroleum products, Mamata rode an electric scooter to reach her office in the state secretariat Nabanno building in Kolkata's adjoining Howrah district.

Banerjee was riding a pillion while Kolkata Mayor and State Municipal Affairs Minister Firhad Hakim drove the electric scooter from south Kolkata's Hazra crossing to Nabanno. Both were seen wearing helmets while the CM was adorned with a protest banners hung from both sides of her body.