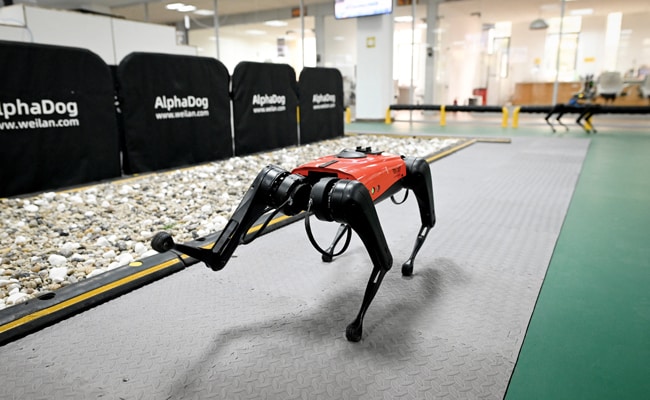 An AlphaDog quadruped robot in a workshop at Weilan Intelligent Technology Corporation in Nanjing, China.

It's whip fast, obeys commands and doesn't leave unpleasant surprises on the floor -- meet the AlphaDog, a robotic response to two of China's burgeoning loves: pets and technology.

The high-tech hound uses sensors and Artificial Intelligence (AI) technology to 'hear' and 'see' its environment -- and can even be taken for walks.

"It's really very similar to a real dog," says Ma Jie, chief technology officer at Weilan, the company behind the product.

AlphaDog follows in the paw prints of "Spot", a four-legged machine designed for industrial use by Boston Dynamics that became an internet sensation after appearing in a series of viral YouTube videos.

Its Nanjing-based creators are instead targeting the consumer market and say their robot dog -- which moves at a speed of almost 15 kilometres (nine miles) per hour and spins on the spot like an excited puppy -- is the fastest on the market.

With four metal legs it is more stable than a real dog, Ma explains as one of his team swiftly kicks it to prove the point.